Society and Culture · THE PRESS OF YESTERDAY

Yesterday, the well known sculptor Keith L. Andrews (KLA) was found face down in a vat of hardened modeling clay. Authorities are investigating the mysterious conditions surrounding his death. Crime Scene Investigators are uncertain whether the smile on his face was one of joy or a grimace that resulted from chronic flatulance.

Since the early years of the twenty-first century, Andrews had struggled to overcome both the prejudices of the professional art establishment and his own self doubts. In late 2016, he had re-entered the realm of art full time. This was after a transition period in which he did not know where he belonged – the scientific / bureaucratic establishment or the art world. Briefly, during the period 1971 to 2015, Andrews had temporarily distanced himself from sculpture - a favorite pastime in his youth - to study, then live and work in Central America as an entomological researcher, professor, administrator and development specialist. He told one reporter that it was a cool role to be a good gringo in Central America during that time. Andrews authored five now-forgotten books and over 100 refereed publications, all buried in the dust of time.

As a really white, male, Baby-Boomer, predominantly right-handed, pretty much heterosexual, long time rationalist and defender of the Enlightenment, he had few of the necessary assets to become an accepted mainstream artist in post modern America. Instead he acquiesed to play the role of the quintiessential Inside-Outsider. He was always fascinated by human diversity and intigued by how bewilderingly complex and self-contradictory Homo sapiens guys and girls are. He was chronically and uncritically committed to bridging cultures and ideologies (but look how far that got him).

He held a PhD in Entomology (Bug Science, pretty funny, right?), and in sculpture he was largely self taught, largely because most teachers gave up on him, or he on them. At one time, he served as President of TEA Escultores, the Salvadorean National Sculptors´ Association.

In 2016, Andrews embarked on the major project that consumed the rest of his life. He declared himself an unrepentant, optimistic humanist and stated "I celebrate the best in our species through sculpture. My practice is unified and focused through the Project 100 People Who Deserve Monuments Better Than I Can Make, But Won't Ever Have One Unless I Do It For Them. This undertaking gives 100 special people, many of them archetypes, the recognition they deserve, and more importantly it counteracts in some small way the pessimism, cynicism and fatalism that poisons our societies and paralyzes millions of well-intentioned people." His major works, found in dozens of locations around the world, are his most important sculptural legacy.

Dr. (chuckle) Andrews' sculptures are found in private collections in Europe as well as in North, Central and South America. No one ever called a KLA sculpture (like "clay" sculpture, get it?) beautiful, although the patinas and bases often were. Rather the adjectives usually applied to his works included playful, kitschy, erotic(izing), questioning, ambiguous, expressive, empathetic and discomforting. Many are comically frightening, just like existence. Most are frankly and unrepentantly narrative and focus on the dualities and contradictions in life, like biology / technology, masculinity / femininity, good / bad or me / us. 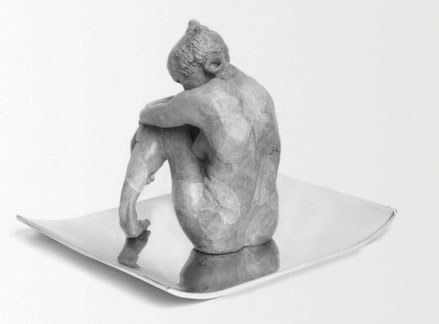 Work: "Who am I". Part of the personal collection of the sculptor 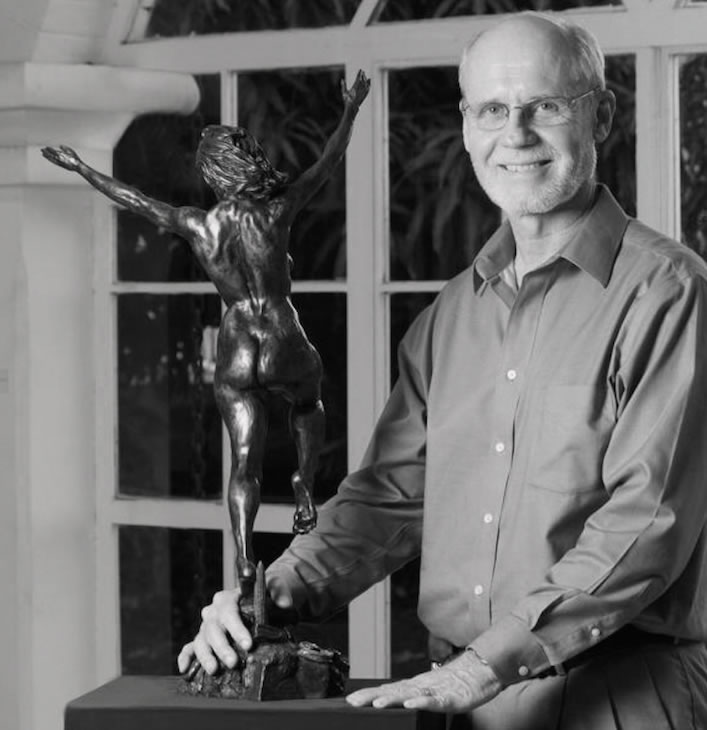 Prior to 2017, the sculptures were recognized as "interesting" and of increasing technical quality, but those produced in subsequent years are variously described as provocative, subversive, offensive and, in many circles of just plain bad taste. Andrews felt that they told the truth. During this time most of his work involved collaboration with other artists and creative people, through his project "Nos-Otros".

People frequently commented that the KLA sculptures are thought provoking, to which Andrews responded incredulously "You need a chunk of colored metal to catalyze that process?" Instead, he was proud that his work was accessible; he frequently said that he wanted it to be interesting and intelligible for an intelligent eleven-year-old. He strove for expressive, even exaggerated, non-idealized and biologically respectful figuration; he celebrated asymmetries, caesarian scars, wrinkles and sags. In fact, most of his figures are rather representative of the demographics he hoped would buy his stuff.

Those forward looking patrons who acquired his smaller scale work, especially during the period prior to 2018, were well rewarded financially in subsequent years.

Andrews responded incredulously "You need a chunk of colored metal to catalyze that process?"

Mr. Andrews died of that reality that catches up to us all sooner or later - death, but he seemed happy (or was it the gas?). He might have been remembered for his desire to become a professional American football player, preferibly a defensive end, but his undeniable scrawniness made that an impossibility. But that's of no importance to this story….

He is survived by his first wife (he was unartistically monogamous), three wonderful children, their beautiful progeny, and a pile of unfinished sculptures and unrealized ideas.